IF THE NAME MILETÍN IS MENTIONED, MOST PEOPLE WILL REMEMBER THE BIRTHPLACE OF THE AUTHOR OF THE BOUQUET, KAREL JAROMÍR ERBEN. BUT THE SECOND CHARACTERISTIC FEATURE OF MILETÍN ARE THE ERBEN OR MILETÍN PRAYER HOUSES, WHICH HAVE MADE THIS TOWN VISIBLE IN THE REGION BELOW ZVIČINA SINCE THE 19TH CENTURY.

Gingerbreads shaped into various figures with the help of wooden molds began to be produced at the Erben family in Miletín during the time when lots and pounds were counted in 1820 in a timbered house with extension No. 174.

At the time, the popular "glancák" was made, which is half a dough made of rye and wheat flour, which was pressed into wooden molds, then rolled into plates and hell. Baked figurines of hussars, regtars, figures of saints, hearts, roosters, horses, horseshoes for good luck, etc., were painted and polished with glue.

In 1834, the production moved to house no. 11 on the square, which was purchased from J. Paczelt from Zvičina. At the beginning of the second half of the 19th century, gingerbread called "pumpernikl" began to gain ground, which was made of wheat flour, again shaped using wooden molds, tipped and baked, decorated with sugar and protein icing.

The idea of ​​making prayer books (an original type of gingerbread goods) came to my father's great-grandfather Josef Erben (March 16, 1802 - February 28, 1889) in 1864, looking at women returning from a Sunday service and holding a prayer book in their hands. Its shape inspired him to make a honey gingerbread with a hazelnut filling, on which there is a slice of egg whites and other components, and on top of the middle of the sugar icing is half an almond. With the son and successor of the craft Josef, they offered this novelty the same year at the famous Miletín pilgrimage, which takes place regularly at the end of April. And because their premiere was successful, this gingerbread rarity, in which honest handmade production plays a decisive role to this day, has become a prestigious product for Erben. 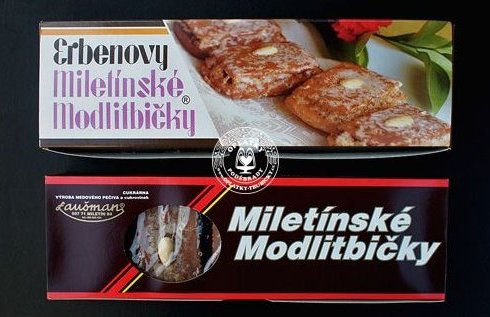 Prayer books became a specialty, which was awarded in 1894 at the industrial and ethnographic exhibition in Hradec Králové, in 1903 at the exhibition of the Czech Northeast in Hořice and then in the thirties at exhibitions in Nová Paka (1935), textile and landscape in Dvůr Králové. (1936), Trutnov and Jaroměř.

The product was delivered not only to the Czech Republic, but also to Austria, Germany and France. Since 1913, prayer houses have been protected by a verbal trademark. At the beginning of the twentieth century, under the influence of another Josef Erben (June 12, 1892 - November 23, 1953), who was trained as a confectioner - gingerbread maker, house No. 11 was rebuilt in 1921 and the shop space was enlarged, another workshop added, warehouses and garages built. The machinery of the workshops was modernized and the production of both confectionery and gingerbread assortment was expanded, and it was the prayer books that became a sought-after delicacy. 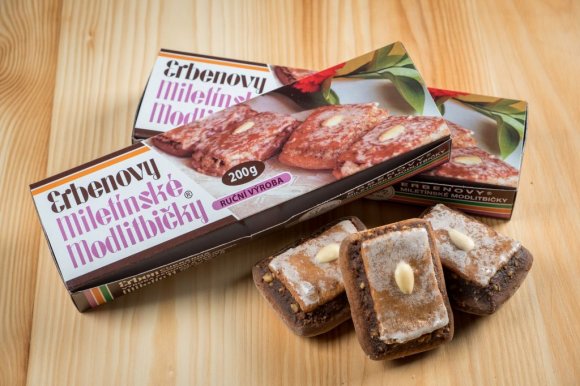 Among other things, President TG Masaryk enjoyed the prayers on the occasion of his visit to Hořice and Miletín on July 10, 1926. In his book All the Beauties of the World from 1992, the poet Jaroslav Seifert also remembers the prayers "Miletín prayers? How could it not! I bought them for the children at the Jičín fair. But even this devotion is no longer produced in Miletín "

There was a partial reduction in production during the Protectorate. The experience of the First World War was repeated, when almonds were unattainable and were replaced by a sugar cross. Even in the post-war period, the shadow fell on the trade of the Erben family and broke the family tradition for 42 long years. After February 1948, followed by the nationalization of 1949 and the eviction of the family from house No. 11 in the square.

New producers in the years 1949 - 1991 under the names, first Pardubický perník, np Hr.Králové later Jednota sd Hořice and finally Východočeské pekárny a cukrárny Pardubice no longer produced traditional prayer books, mainly due to their name inclined to Christianity, only occasionally during the Miletín pilgrimage expanded for an imitation, which they sold under the name Miletínky.

The production was returned to the original owners in 1991 and from that year until today the company Erben s ro operates here. It produces both confectionery products for its own shop in the building, as well as an assortment of gingerbread goods, including the still popular Prayer Books, which are becoming a unique and sought-after souvenir from the Krkonoše foothills.

In addition to its store in Miletín, the company also supplies its products to other retailers in the Hradec Králové, Liberec and Central Bohemian regions.

You can also taste them about twice a month in a specialized shop of regional specialties in Poděbrady in the middle of the colonnade. The sixth generation of Erben, sons Karel and Jaroslav are trained confectioners (Nová Paka) and so we believe that confectionery and gingerbread in the family will be maintained in the future.